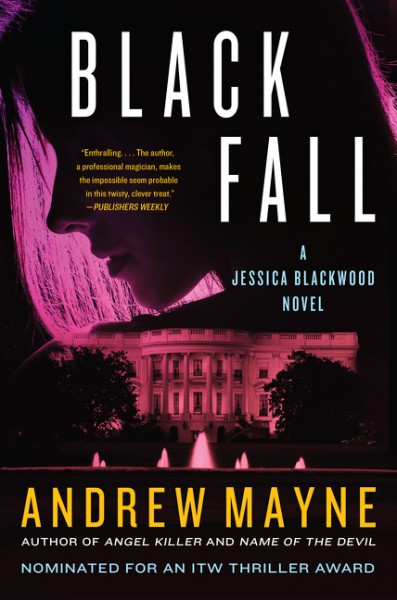 In Black Fall, the third book in the ITW Award-nominated series that began with self-published eBook phenomenon Angel Killer, magician-turned-FBI agent Jessica Blackwood investigates a series of seemingly unrelated, but equally bizarre and sinister, crimes that lead her to the Colorado desert and a town that has, simply, disappeared.

With two big cases under her belt, FBI Agent Jessica Blackwood is learning to embrace her unconventional past as the rising star in a family dynasty of illusionists. Her talent and experience endow her with a unique understanding of the power and potential of deception, and a gift for knowing when things are not always as they appear to be. Once resenting her eccentric grandfather, a brilliant magician in his own right, Jessica now sees him as a mentor and regularly seeks his advice about her work.

But Jessica’s routine surveillance operation becomes a fight for survival when a disturbed young woman, clutching a baby, shows up at the stake-out location and threatens to kill her child. On the same day, an hour after a severe earthquake rocks the eastern seaboard, a strange video goes viral. Nobel Prize-winning physicist Peter Devon has been dead for eight years, yet here he is on camera, predicting the location and date of the earthquake. Jessica is put on the case by her boss, Dr. Ailes, but when Detective Aileen Lewis reports that they’ve found a Jane Doe who matches her description of her attacker, she’s torn between professional duty and a personal desire to find out who the woman was, and why she was killed.

The investigations pull her in very different directions—until they start to converge, leading Jessica to confront something darker, and more powerful, than anyone expected. Something so twisted, only one person could be behind it…the Warlock.