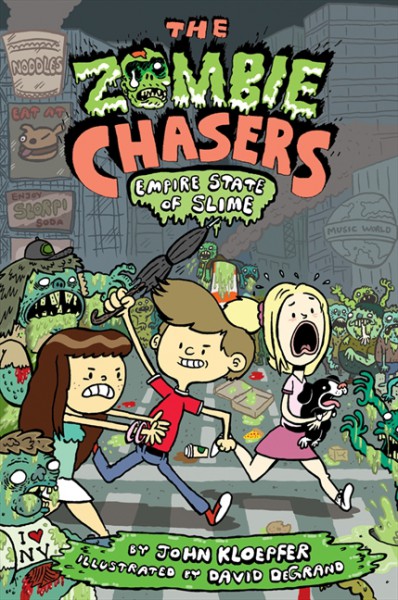 Zombies take Manhattan in Empire State of Slime, book four of John Kloepfers hilarious and stomach-churning Zombie Chasers tween series, with illustrations by David DeGrand. Perfect for fans of Diary of a Wimpy Kid and The Strange Case of Origami Yoda, The Zombie Chasers #4: Empire State of Slime is overflowing with uproarious middle school humor, dead-on illustrations, and high-action adventure that will leave readers moaning for the next installment of this sidesplitting series.Six months after Zack Clarke, his sister, Zoe, and pals Rice, Ozzie, and Madison saved the country from brain-gobbling ghouls, life is finally heading back to normal. But while the kids are busy exploring the Big Apples sites on a class trip to New York City, things go from sublime to slime when millions of people suddenly rezombify!The Zombie Chasers are back on undead duty, but can they escape the crowded city streets and find a new cure, or is Z-Day here to stay?